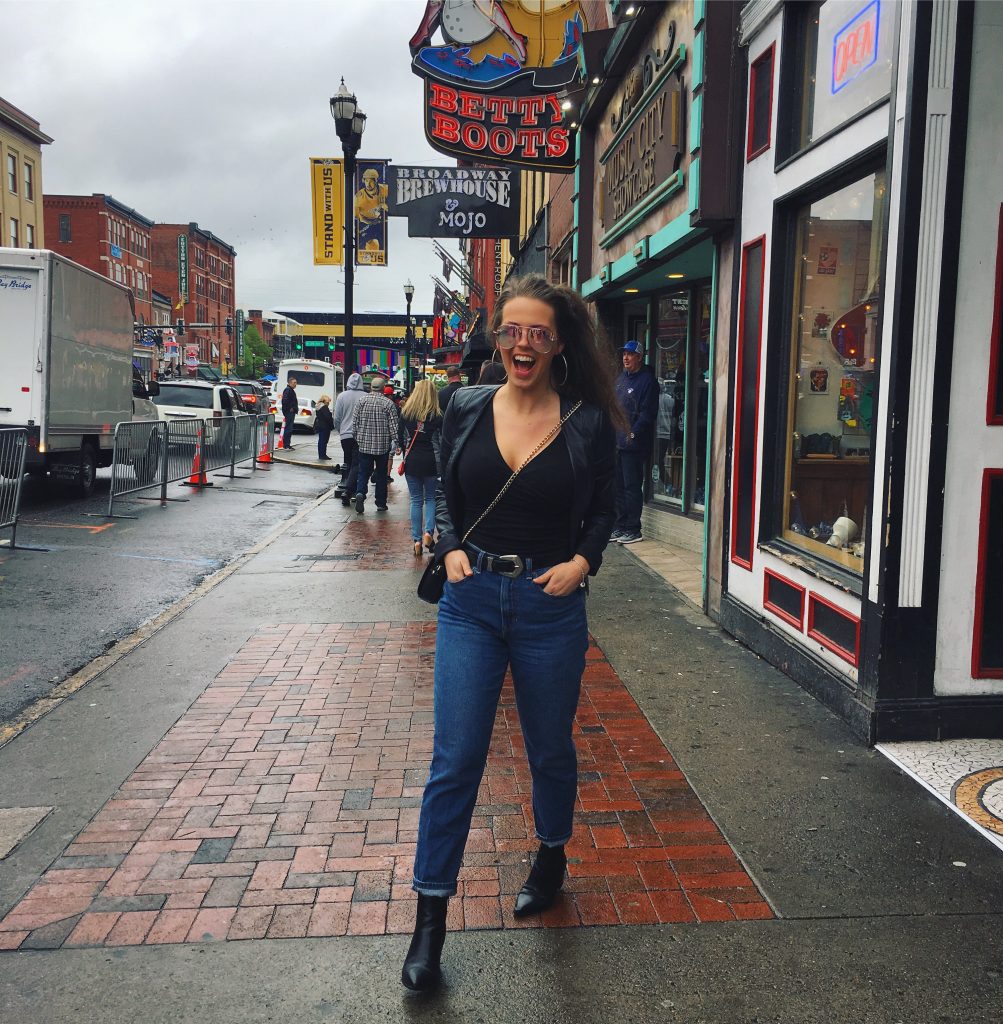 Honky-tonks, southern drawls, biscuits and sweet country music. I forgot how much I loved music city.

Honestly it had been a hot minute since my last visit to Nashville. 2014 was the last time I had been there. Reason being, that in 2014, I was only 16. I was with my mom and my auntie Lisa; we were on Broadway hitting up the famous bars and of course, I had been ID’d at one of them. Obviously I was a baby, so the bouncer drew two very large X’s on my hands before going in. Like, nothing screams “Hi, I’m a minor, don’t talk to me” more than that. I really just wanted to meet people and listen to the music. However, it was made quite difficult to do so when I couldn’t really go to the main social grounds that is bars. It was still a positive trip though! We did all the touristy things. Went to the Opry, the museum, I played a few songwriters rounds and even made my way through the BlueBird’s crazy open mic night. After that trip, I made the decision to wait until I was 21 to return so I could fully experience the city on my own terms. So here we are now.

Off we go! So my travels to BNA was a classic 3:45am wake up call, to almost missing my first plane, to a delayed connecting flight, all with no coffee in my system and a guitar strapped to my back. We thankfully landed safely, I checked into my AirBnB, and I was off to my first write of the week that night.

Side note: Apparently the area that I was staying in was considered the ‘hood’. I had an Uber pick me up for my write and he seemed so concerned why I would be staying in that area of town. As the week went on I definitely noticed it was a little sketchy, but I also grew up near a halfway house. So It didn’t phase me all that much. I figured as long as I wasn’t taking 2am strolls around the block with a wallet full of cash i’d be good.

First few days were wicked. It was awesome writing with some great people who understood my sound and what I want to say as an artist. I really feel like some of the songs I am coming home with are such a good representation of who I am in this moment of life. Hahahahaha no

My gal pal, and a fantastic country artist herself, Melissa Livingstone was in town at the exact same time as I was too. So lemme tell you, it was a crazy time. But really though, what are the odds that two singer friends from western Canada are in Nashville for the exact.same.dates?!

So, on the wednesday, I had a solid write with mr. Jimmy Thow (more on that song to come 😉 )  and then met up with Mellissa for some good ol’ southern BBQ for dinner, on Broadway before seeing some buddies play a round downtown. This was the first time being downtown since that time I had those two black marker X’s on my hands. So I was pretty stoked even just to order a Miller Lite. Music was great, it was awesome to meet some wicked artists, writers and musicians that i’m excited about future collabs with!

A few whiskey’s later and we decided to keep the night going and head to a part of the city called Midtown. Now, if you follow my instagram you’ll know what happened here, and my god was it messy.

In Nashville, they have these scooter things, that you stand on and can travel around for a cost by the minute. If anyone from Vancuver is reading; think the Sha2Go bikes or Car2Go, but in skateboard form, with no helmets. How is this legal? I have no idea. As you can imagine, yes I fell pretty hard into a fence, got pretty scraped up. I you know me, you know that I’m a pretty clumsy person to start with, regardless of the liquor, so it didn’t end well.

We were halfway to where we were headed so I just sucked it up and kept truckin’! So now we roll up to the bar, I’m wearing Lynyrd Skynyrd shirt, i’ve got ripped jeans  bloody knee, and i’m ordering straight JD to numb my crash pain. I don’t know what kind of opinions people had of me that night, but it sure wasn’t pretty, haha. Lets just say the morning after this event I had UberEats deliver fried chicken and biscuit to my door and poppin Advil like there was no tomorrow. I learned my lesson. Don’t scooter under the influence.

Also while we are on the topic of traumatic experiences… I also had an anaphylactic shock while I was in town. Melissa and I were coming back from watching a great round at the Listening Room. We decided to stop at a cafe for a snack before we went to our writes for the afternoon. When I was at the till I had told the lady working that I had a nut allergy. I asked if there was anything I should stay clear from; she mentioned to avoid most of the food. So, I just ordered a black coffee to be safe. She gave me an empty cup that I would go fill up my self from their four push down coffee pot options. So I’m thinking they are either all the same coffee, or its like a dark roast, decaf, ect.. I picked one, filled up my cup and sat down. I had one sip and thought, ‘hmm, this tastes funny.’ I got up to see what kind of coffee it was. Lo and behold it was a hazelnut blend!

Of course I immediately went full panic attack mode (which is completely making a scene of shock) yelled out that I was about to go  anaphylactic. Popped a few Benydryl before my throat would close up, and waited. The staff were helpful, they called 911, and kept me semi calm. Didn’t use my epipen at that point because well, conveniently enough, I’m terrified of needles.

The ambulance showed up. I was taken away in a stretcher, which at the time I thought was excessive, but I’m glad I was laying down after. By that time, my symptoms were kicking in. I couldn’t swallow, was feeling sick and short of breath. So I got a good ol’ shot of epi to my arm, and an IV drip (which again, was not excited about). I’m not going to lie, I was a terrible patient. I was flailing and freaking out. More so over the needles then the actual hazelnut situation.

On the way to the hospital, I did have a second rebound shock. The first responders didn’t want to use another epi needle on me (cause im a spazz), so they used this mask that sprayed a mist that helped open my throat back up. I probably looked like Darth Vader. Freaky!

Once I was in the hospital, they basically just monitored my heart rate and blood pressure and wanted to make sure I wouldn’t have another shock. I was there for a few hours, until I was released with a prescription of steroids, antihistamines and anti-anxiety medication. Talk about a freaking day. And yes, I had travel insurance, praise The Lord.

Anyways, the trip wasn’t all medical craziness. I did actually spend a lot of time in the music world too. Haha.

During the weekend I got to do some fun rounds. Played at Live Oak on Music Row, did a round with a few great Canadian friends at Alley Taps, hosted by my girl Ajaye Jardine and then went out near the Opry to the Nashville Palace for a round where I got to wear my comfy clothes, “Jammin in Jammies’ hosted by Megan Barker. Each show I did was special in its own way. It was great to meet new music friends, and share songs that I had either worked on that week in Nashville and some i’ve had in my pocket for some time.

After many days of co-writes, seeing others perform and playing a few shows and rounds myself, I had a realization that is, ‘why am i not living here?’ For the first time I actually felt like I belonged. I felt like I would 100% do what I wanted to do and who I wanted to be. I was inspired and felt like I fit in. As much as I love Vancouver; the nature, the ocean, and all of my wonderful friends and family; my heart is in the south. All I’ve ever wanted was to be living and breathing country music, and Nashville is with out a doubt the place to be.

I’ll be returning in October for a month, all while i’m applying for my Visa’s to be there more full time come 2020. So.Freaking.Excited.

When you realize that quarantine is almost over an

Before taking these photos, I had my hair pinned u

Anyone else feel like putting jeans on is a big ev

Bought a $5 men’s shirt from the thrift store, j

So between the world basically shutting down, and

Share on FacebookShare on TwitterShare on Linked InShare by Email

When you realize that quarantine is almost over and all you’ve done is eat cookies and drink margaritas 💁🏽‍♀️ ... See MoreSee Less

Share on FacebookShare on TwitterShare on Linked InShare by Email